Most observers appear to agree that Alibaba (NYSE:BABA) is gearing up to make a major move into the Western Hemisphere – a safe enough assumption, considering that it appears in black and white on pg. 135 of the IPO Prospectus under “Our Strategies”:

Develop Cross-border Commerce Opportunities
AliExpress – worldwide consumers buying Chinese products. Through AliExpress, consumers worldwide can buy directly from manufacturers and exporters in China at attractive prices. We will continue to develop and market AliExpress globally, especially to consumers in emerging economies such as Russia, Eastern Europe and South America, where quality products from China at direct-to-consumer prices offer significant value.

Alibaba.com – Chinese wholesale exports to the world. Alibaba.com is a global online wholesale marketplace. We seek to expand our import/export marketplace by growing the number of paying members, as well as offering additional value-added services such as customs clearance, VAT rebate services for our exporters and cross-border logistics solutions.

Note that the U.S. and Europe, the two largest consumer markets in the world, are conspicuously absent. That looks like a reprieve for eBay (NASDAQ:EBAY) and Amazon (NASDAQ:AMZN) shareholders, until you realize that emerging markets are key to the growth proposition of both companies, and that a lock by Alibaba on those markets will have an outsized impact on the multiple the market assigns to each. Then it begins to look like a game of Wei Qi, where encirclement is the key to victory.

You don’t have to be a master strategist to know that eBay is the more vulnerable target.

Let’s start by taking a step back in time to July, 2003: That’s the date when a young and mighty eBay first declared war against a meek provincial upstart named Taobao and lost so badly that the company would never get more than a toehold in Asia again.

Now, the usual narrative is that eBay lost China to Alibaba’s Taobao due to the fact that Taobao was free and eBay wasn’t. But the truth is that eBay’s grip was already slipping when it bought out China (and fee-based) EachNet – a company that accounted for 85% of the market at the time – for $180 million in July 2003 and attempting to migrate EachNet’s users to the eBay U.S. platform.

Fig. 1: Rise of Taobao and eBay’s Exit From Asia 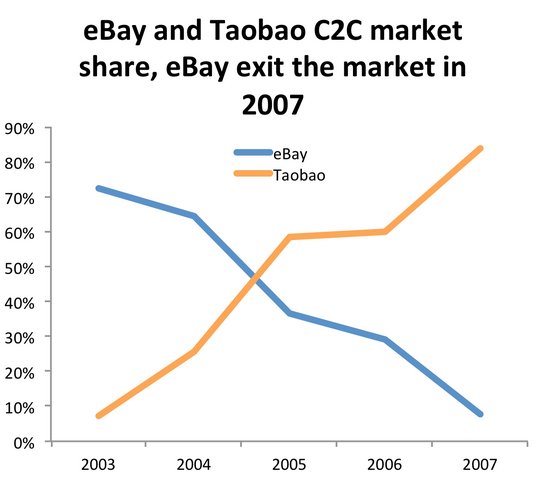 The result was catastrophic. What had been a relatively quick China-to-China experience quickly began to lag as information was relayed back and forth across the Pacific Ocean at a time when China-U.S. information infrastructure was terrible. The result was a hemorrhage of users, with usage dropping off by 50% in less than a month (much to Meg Whitman’s horror). Again, note the jarring similarities between Figure 1 above and the chart below illustrating the collapse of Myspace. This is what happens when a virtuous circle becomes a vicious cycle. 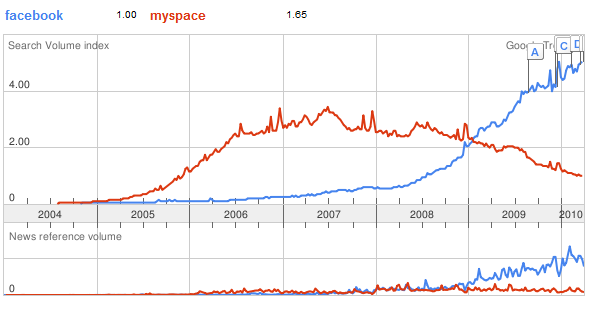 eBay eventually retaliated cutting fees to 0% in 2005, but by then it was too late: Taobao had won.

Perhaps the most resilient aspect of Alibaba is how interconnected its different marketplaces are, with buyers and sellers reversing roles easily to participate in another marketplace, thereby generating, according to Alibaba’s Prospectus, “a second-order network effect.” If Alibaba’s near term objective is to whittle away at emerging markets like Russia and Brazil, it’s ultimate strategic goal is to extend the reach of these self-reinforcing networks to Europe and the United States by plugging Western consumers into Chinese wholesale and retail markets.

eBay’s decision to implement policies that systematically favored high volume dealers over small sellers has resulted in a disparity of influence between East and West. While most of eBay’s Powersellers are now wholly dependent upon Asian goods sourced from Alibaba’s flagship site to maintain their competitive position, the same cannot be said for the majority of Alibaba Gold Suppliers or Taobao’s Powersellers, many of whom source locally. In other words, eBay sellers for whom Alibaba’s industrial-scale strengths were originally a mismatch have since restructured their businesses entirely around products that can only be sourced from an eBay competitor.

That being the case, what’s to stop Alibaba siphoning off eBay’s top earners with $0 fees and fewer policy changes?

With the spin-off of PayPal slated for 2015, eBay’s best strategic option would be to refuse to engage in a race to the bottom with Alibaba that would gut its market cap without making a dent in Alibaba’s value proposition. From this perspective, a friendly Alibaba takeover has the potential to be a winner for everyone except Amazon. eBay shareholders would reap a windfall not only from the divestiture of PayPal, which comprises an estimated $40 billion of eBay’s $70 billion market cap (and could be worth as much as $100 billion as a stand-alone operation), but also from the subsequent acquisition of eBay’s Marketplaces by a competitor with the financial firepower to pay a significant premium over the current share price.

For Alibaba shareholders, a takeover kills three birds with one stone: at a stroke, it would transmute an enemy into one of the company’s strongest assets, put Amazon in check, and at the same time provide the company with one of the recognizable brand names in the world’s most affluent market while establishing Alibaba as the undisputed world leader in ecommerce. I’m fairly comfortable, therefore, in predicting that such a takeover is precisely what will happen, and moreover, that it will happen in 2015.

This site uses Akismet to reduce spam. Learn how your comment data is processed.